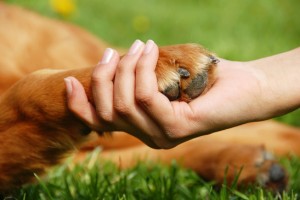 Earlier this week a television presenter was at an animal shelter featuring dogs that were proving difficult to re-home and, along with a member of the 'trained' staff, drew the viewers attention to a lovely staffie cross bitch who was being hand fed by the member of staff. I say being hand fed, which is actually incorrect; the dog was being prevented from actually getting the food as it was being tightly held by the 'trained' staff member.

The dog was clearly focused on the food when the presenter walked behind the dog, knelt down and with an emphasised word placed his hands on the back of the pre-occupied dog. The presenter had been looking into the camera lens, extolling the qualities of this dog and how, through no fault of its own, it was in the need of rescuing and as the presenter placed his hands around the hips of the dog, it spun around snapping at him repeatedly. What amazed me was that both the 'trained' staff member and the presenter looked shocked. The presenter’s response to this was to look into camera and say that the dog was ‘obviously camera shy' and all there laughed.

On the same subject, this brings to mind the story of the visitor to Yellowstone National Park who wanted to get a better photograph of a huge bull bison, so he pulled the animal’s tail to get it to turn around for a better shot. Oh yes, the animal turned around alright, charged at his attacker and promptly tossed him into the air. Happily the bison was not blamed or destroyed- despite the demands from the family of the cameraman!

The strange thing about the TV segment on rescue dogs was that it wasn’t clear what they were actually trying to achieve, as they were originally promoting a dog which was now going to be labelled unpredictable and possibly dangerous. This poor dog was set up to fail instead of being protected from human actions that were almost guaranteed to result in defensive action.

In our own way all of us dog owner can help prevent such mistakes by preventing other people from touching a dog without first allowing the dog to clearly see them and acknowledge them, from a comfortable distance. Even then, a stranger should invite the dog to come to them rather than the other way around. The dog can then choose whether it feels safe enough to approach and it also has the option of taking more time, if necessary,  to feel further reassured. Dogs are not stupid; they all know that there is no such thing as an instant friend!

I have always kept to this rule, allowing animals to clearly register my presence, from a comfortable distance so they do not feel threatened (although I’m not always inviting the animal to come to me, as that hasn’t always been appropriate!), it has kept me safe when I have been with lions, cheetahs, wolves, elephants, mountain gorillas, coyotes, bears, buffalo, bison, elk, and quite a few other species. On many occasions the distance allowed could be considerable and I’ll always take advice from the experts on any particular species as all animals have different ideas about personal space, based on their physical characteristics and their place in the food chain. Leaving an appropriate distance and allowing the animal to register my presence, until it has been able to disregard me as no threat, has meant I’ve enjoyed being in the company of so many different and wonderful animals, without danger or threat-to either party.

It is called respect, plain and simple and I invite every dog owner to help teach those that they come into contact with to adopt this attitude by requesting that the stranger refrain from attempting to touch your dog. That may sound rude but you could always explain that 'there is training taking place'. You are teaching them to leave strange dogs alone and before you think that this is harsh just think of the times that lovely dogs have been killed because they have found the need to protect themselves by nipping or biting someone who has touched them.

I consider it is better to protect my dogs than try to be popular with those who feel that they have to touch. Sometimes it can be hard to do the right thing but your dog needs you to put its natural instincts first, before your need to be liked.