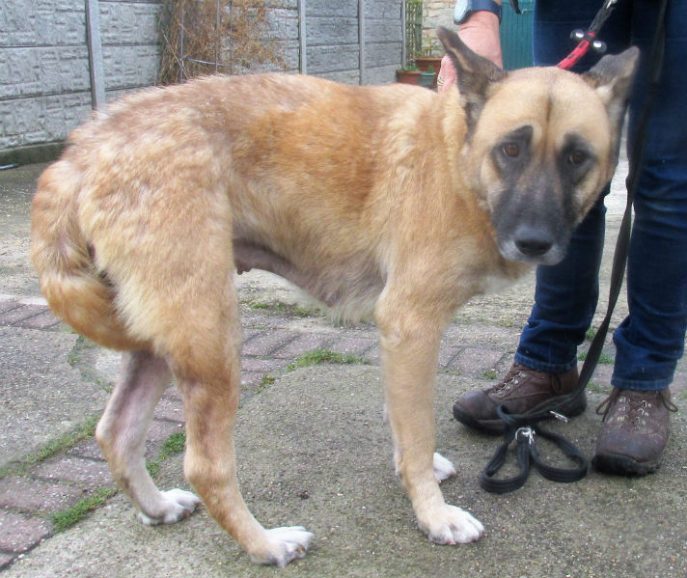 After four years of being hidden away in a small filthy enclosure producing litter after litter of puppies this German Shepherd, Akita cross- bred bitch came into the care of GSRE Rescue, where their first task was to get her to a vet to treat the painful skin disorder, sarcoptic mange,  that she was suffering from. The treatment was started immediately and so was the gentle rehabilitation of a dog that they christened Honey.

Building her up, probably for the first time in her life and dealing with the coat condition took many months and only when the rescuers were confident that she was ready for re-homing did they accept the application of a family who came forward. Honey went to live in their home setting, only to return some months after having been labelled as dangerous, following an incident when she had snapped at a man who approached to ‘pet’ her when she was left tied up outside a supermarket.

Of course, the rescue organisation knew that it had been the situation that had caused this defence action taken by Honey but being more concerned with Honey’s future they took her back into their care and happily there was one of their Foster Carers able to take her and keep her safe until, hopefully a permanent home could be found.

Fast forward many months and I had decided that I was now ready to share my life with another dog, after losing the last of my own wonderful team late last year and I decided to approach respected rescue organisations to see if between us we could find a happy outcome.

After passing their requirements and looking through the list of dogs all needing a new home, I suggest four older females, all with different pasts and they asked if I would like to meet Honey and this was duly arranged and on a sunny afternoon in June she was brought out of the kennels that she was staying at temporarily and after a short stroll around a field I invited Honey to come to say ‘hello’ which she happily did.

There is little surprise that I found her a delight and so the official adoption was arranged and just five days later I returned to the kennels to collect my new companion and as I drove home I knew that we would have many hurdles ahead but was confident that as I would completely surround her with the process of Amichien Bonding, that this would provide her with the security that would enable us both to work through any challenges that may arise as a result of her past life.

I had been warned about one of her problems, which was becoming very agitated when anyone can to the door and in the case of the Postie would add the destruction of the mail to the list of habits. Fortunately I had heard of this many times and actually worked out that when a 'Postie' comes to the door and the dog reacts by telling them to 'go away', they actually do.  Of course, the dog does not know that the person is only usually delivering mail, so as far as the dog is concerned it succeeds over and over again and to make their point of rejecting the approach even stronger they can destroy what the person has delivered, as if to say 'and I won't have your rubbish either'.

Happily, as we work together and she builds trust in me to take care of any perceived threats then, when she barks at what she considers a threat and I 'thank' her, she will learn that the calm warning is enough and in time she will ignore the 'Postie', as not being any threat at all, which is something all of my other dogs did.