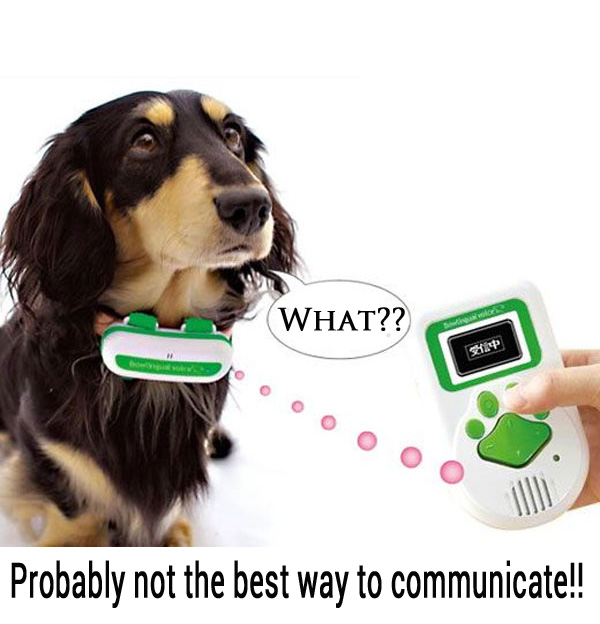 I am often asked my thoughts on a gadget or training approach that becomes 'popular' for a while and my answer always remains the same; no external, physical experience can ultimately resolve any behavioural issue as the cause is always in the mind of the dog and its own reasoning. This is why I sought a process that would remove the cause of the problems, aided by external “cues”.

The problem for most owners is that there usually seems to be a positive reaction from the dog when using certain aids but the truth is that this can only be temporary and by the time people eventually come to realise this, the idea or gadget has already become an established part of the 'normal' thinking about working with a dog and viewed as essential, so let us look at why this can happen. Enforced “Socialisation” of dogs is a prime example, as the experts that came up with the idea in the 1960's quickly changed their minds, realising that it could never work, however it was too late. As the theory seemed sound, it was widely accepted by dog owners everywhere and even now, the belief that a dog can be made to accept any and all forms of modern society, remains. Trusting owners, who genuinely want the best for their dogs, seek advice from people with more experience and have these established (but ineffective) methods pushed on them as essential requirements for happy, obedient dogs.

When a desperate owner is told that something will work for them and their dog they usually take comfort from this information and relax. I came to appreciate this first hand once I had developed AB and explained to owners that their problem was very common and easily resolved. I soon came to realise that on hearing how their problems could be removed the owners actually relaxed and their dog would pick up on this very quickly, which in turn made it possible for their dog to believe in them a little more and the challenging behaviour settled down for a while. In exactly the same way if a gadget, such as bandaging, wrapping, drugs or other device is adopted by the owners, this is accompanied by the same level of improvement in the stress level of the owner. The owner’s, belief in the device’s effectiveness does genuinely engage the dog- temporarily. Similarly, if there is an introduction of violence, such as a shock/spray collar etc, the dog is so traumatised that again its usual pattern of behaviour is interrupted. However, as the 'new' experience becomes familiar, about two weeks, then the challenges from the dog start up again, usually much worse than before. The dog, initially engaged as the owner attempted to take control, now sees that the owner has failed to follow through by giving it the information it is looking for, proving that owner is certainly not the leader that the dog needs.

The important difference with AB is that when the owner discovers it, whether through books, DVD's, training courses or by a visit from a recommended Dog Listener, the owner is able to follow through and deliver for the dog, as a true leader.

The false confidence that can come from using shock collars, drugs, gadgets or surgery, and the temporary change they can elicit, has a short shelf life and results in the owner becoming more desperate than ever before. The owner becomes convinced that the failure is theirs and not that of the gadget or training process and they could easily have parted with a great deal of money going from device to device. This in turn goes against both dog and owner as the downward spiral into even more problems increases with every attempt.

These gadgets are as effective as fad weight loss products that promise that “combined with regular exercise and a good diet” they could help reduce a person’s weight. Just listen to the terminology of adverts that say a certain product “could improve”, “may improve” “could help” they are all the same. If you have a sound exercise and diet regime in place (the fundamentals) you will lose weight anyway, making the product seem remarkably effective.

When it comes to a dog displaying undesirable behaviour, the simple truth is that no gadget will change that dog’s mind about why it needs to behave in that manner. The underlying cause comes from the dog confusion about its role and what is expected from it- in an environment it just doesn’t understand. Using AB and learning to communicate effectively (the fundamentals), removes this confusion and finally delivers the peace that the dog desparately needs.

Turning to the latest 'magic thing' and seeing a temporary fix is just a misleading illusion and all owners and dogs deserve far better.