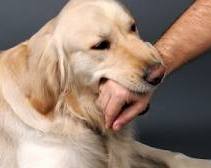 A dog that "mouths" can be, at best, simply irritating but, depending on the severity, it can be extremely worrying and damaging for your relationship, however, there is no need to live with it.

Friends of mine happened to be enjoying a warm summer evening in the gardens of a local hostelry, when they spotted a very handsome young German Shepherd dog and commented on how beautiful the dog was.

The owner told them that the dog was just seven months old and that they had only had the dog for a week, their home being its fourth to date.

Sadly, they were lead to believe, by the rescue organisation concerned, that the behavioural problems the dog had displayed meant that they must take him everywhere they possibility could and as soon as possible;  ‘socialisation’. In truth it is total sensory overload to an already confused and frustrated young animal and guaranteed to add to his issues as time goes on. If only they had been advised to keep the dog at home for a couple of weeks, working on helping the puppy overcome its behavioural problems and provide the safe and secure structure that AB brings, before attempting to add more challenges to this troubled soul, life could be a lot easier for both the determined owner and this desperate dog.

While talking it was clear that this youngster constantly mouthed the owner's hand and arm and while not being aggressive in any way, it was very persistent, something that was clearly annoying the owner.  The advice that they had been given regarding this particular habit, again by the rescue centre, was that it was typical of puppy behaviour and that he would just ‘grow out of it’. That can sometimes be true but it should certainly not be left to chance.

My friends knew that any suggestions that they would make would almost certainly have fallen on deaf ears, as this owner had put his ‘trust’ in those who had rescued the dog, so were left wondering just how long this, most recent, home would last!

‘Mouthing’ is both very common and so easily corrected, it should not be left to potentially develop into something far more dangerous. I hope that anyone who is experiencing this type of behaviour will see that one of the following successful options is for them.

The instant that the ‘mouthing begins we can;

1. Walk away from the dog, without speaking or acknowledging the dog in anyway. Leave the dog on its own for a few minutes, or until it calms down.

2. Remove the dog to a place of isolation (time out) and leave it there for a few minutes or until it is quiet.

3. As long as there is no aggression involved, simply tickle the inside of the dog’s mouth with your fingers. As the dog pulls away (as it will) you will stop and if the dog repeats the mouthing, you repeat the action.

All of these are done without speaking to the dog, getting angry with the dog or even looking directly at the dog and as with all of AB working, the dog learns to control its own behaviour through the process of consequence of action.

The third option was something I was first shown by the handlers at Wolf Park in Indiana and I was able to implement it with the yearling wolves, which were testing me out when we first met them. With one wolf I did it the once and he chose to stop, where his brother took a couple more repetitions; same result, job done.