Home » Latest News » How Vulnerable Our Dogs Can Be

As I approached the supermarket at 10.15 this morning I saw a man jerking a shopping trolley back and forth and at the same time yelling at the top of his voice. 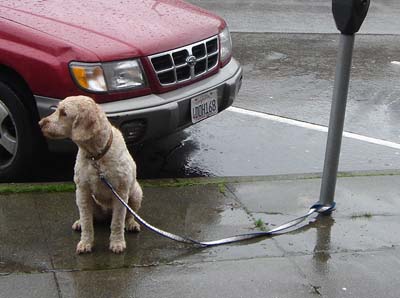 My instincts told me to give this scene a very wide berth until I saw that the object of his anger was a terrified little dog tied to a metal post.

I ran over to the situation and quietly asked the man if the dog belonged to him, to which he gave a less than gracious reply but realising that the dog had no connection with this man I asked him to simply walk away.

He continued to scream that he hated dogs and this one was pathetic and whining, which annoyed him.  The man did question my speaking to him to challenge his behaviour but I just stood still blocking the little dog.  While other people walked past voicing disapproval at the events.

After a minute or so the man finally realised that I had no intensions of speaking further to him but equally that I was going nowhere and with less than polite words he left us alone.

I remained a few feet from the Whippet size black multi pedigreed dog and became a little happier for her when the shaking steadied a little to a rhythmic trembling. She continued to whine and desperately looked all around just waiting for those that she loved and that loved her, fortunately for us both her owner came along about 10 minutes later.

I relayed the encounter to the owner who was totally amazed and sad, telling me that "Lucy" was usually just fine there but when I asked her how she knew that to be the case, she saw my point and when she asked me what I thought she should do I asked that she leave Lucy in the car, with the windows open or at home when a shopping trip is needed.

This was all very timely as I currently have two dogs here that separately had been destined for destruction as they were, in the words of the Vets involved,  displaying ‘unpredictable aggression’, their crimes were that when a stranger moves in to ‘pet’ them they had snapped at the people and therefore could not be trusted, according to the expert.

Once we look at the whole situation through the eyes of the dog then perhaps we realise that with a stranger coming straight at them, with all means of escape denied them, whether they are on lead or tied up, for both of them their only means of survival is to defend themselves.

There is nothing ‘unpredictable’ about this but many dogs are killed when a qualified person puts this label on them, even though this are totally wrong and their conclusions are based on ignorance of canine behaviour.

Leaving a dog tied up anywhere causes the dog great distress and it is more likely to behaviour in an unfamiliar way, even nipping or biting anyone who comes at it to stroke it.  If a dog is free then it can move away from a stranger but if its tethered and  if it feels unhappy, its only recourse is to lash out using its mouth and teeth.  A dog cannot give you a slap.

The answer as always is simple never leave a dog tethered away from you and if you see a dog tied up in this way please resist wanting to approach to make friends and do the kindest thing that you can do which is to walk past without even looking at the dog and you will actually help reduce the terror that it is inevitably feeling.

I know that there are many dogs that seem to enjoy the attention of strangers and to help distinguish between the two just watch their ears, if drop back then see that as a form of clear concern by the animals and if that dog looks away from you, avoiding eye contact then please be kind and leave the fearful dog alone and you may even be saving its life, because it often only takes one person to complain when a dog snaps for the dog to receive a death sentence.

Don’t approach a dog that clearly doesn’t welcome your attention. I always teach children to avoid strangers, be it human or a canine, and that way, whatever the species, we can all stay safe.