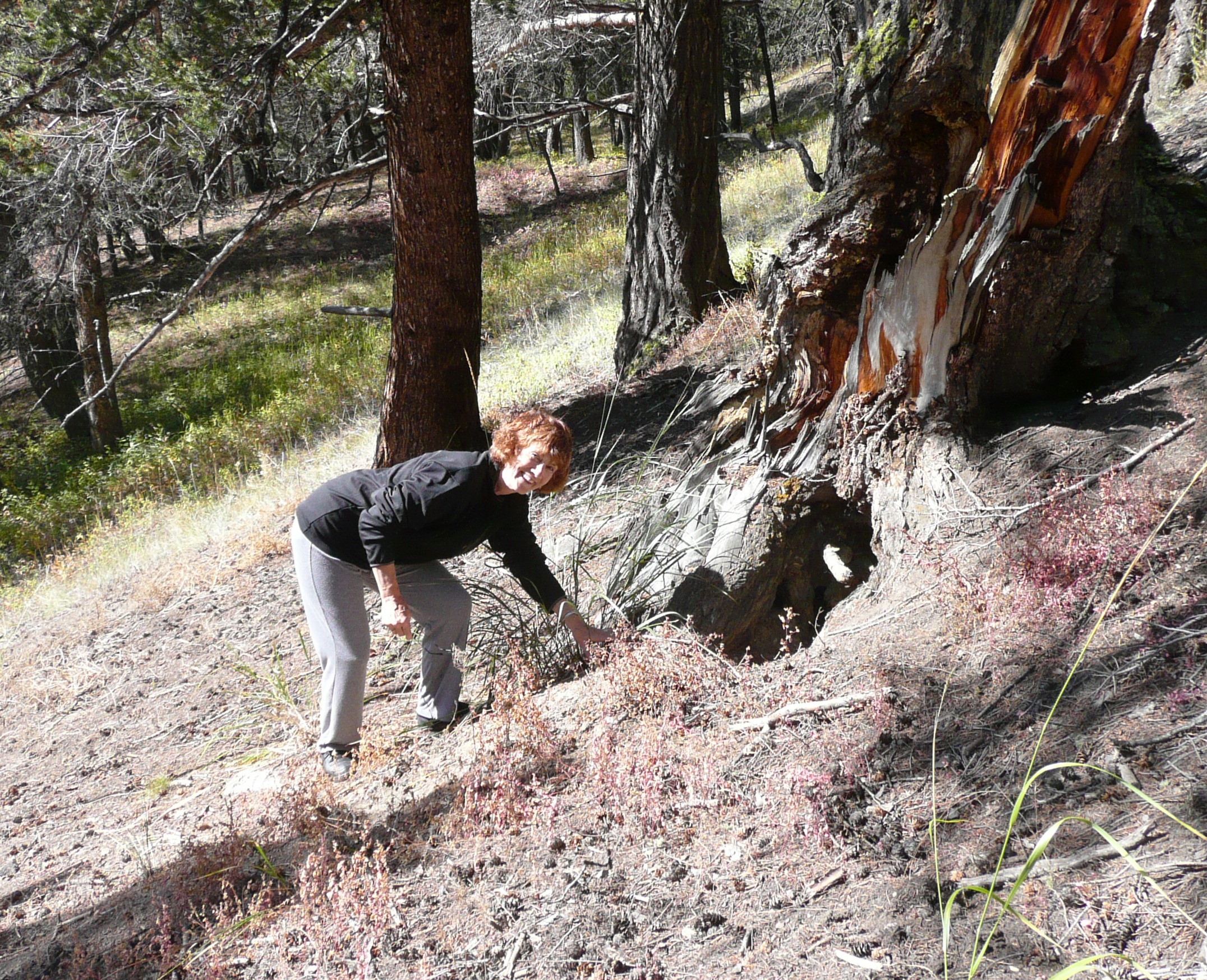 Little did I realise how vital Yellowstone National Park would become to the level of knowledge that I would be able to gain, in my quest to find a kind and effective way of working with domestic dogs that both respected and allowed for their true nature. This was only possible due to the uniqueness of the level of management that accompanied the reintroduction of wolves in 1995.

I had discovered the successful method of getting a dog to relax and work for me, because it wanted to and not because it was made to, some years earlier but the depth of understanding was what I missed. This is why I remember, so well, the first televised documentary following this event and how the wolves faired in the first few years in the Park.  Filmed by Bob Landis, the three year project 'The return of the wolf', was spellbinding and provided me with the desire to go and (hopefully) see the wolves for myself.

I had come to appreciate that to understand any species it is essential to observe them over a long period of time and living in their own natural environment but even then misinterpretation easily happens, as this can only be a snap shot, without a complete picture of the individuals as well as the whole family (pack). Anyone entering into even the best study programmes come with their own preconceptions which influence the way events are eventually presented but with the wolves of Yellowstone I was able to double check anything that I saw or encountered.

The other advantage that I had was the input of those who monitor the wolves on a daily basis and their willingness to share their observations and information. This included uncut footage, courtesy of Bob, research papers supplied by Doug Smith (Project leader) and the dissertation presented by Dan Staither to obtain his Doctorate.

Repeated wolf watching visits, at different times of year and time with the help of the researchers and other professionals, including guides Linda Thurston, Nathan Varley, Wildlife Photographers, Dan and Cindy Hartman, over coffee in, their wonderful cabin home. All of whom helped me come to let the wolves show me their own truth and this enabled me to see how, and why, Amichien Bonding is able to work so well with every 'dog', to avoid the usual behavioural problems so common in our modern society and happily how to teach other owners how they too can resolve issues, from pulling on the lead to dog aggression.

Photographs of many of the wolves that I have studied adorn my home and serve to remind me of how special the project has proved not only for the ecology of the entire region but for anyone who wants to really understand their dogs and I have been able to share this amazing experience with the guided trips to Yellowstone since 2008. 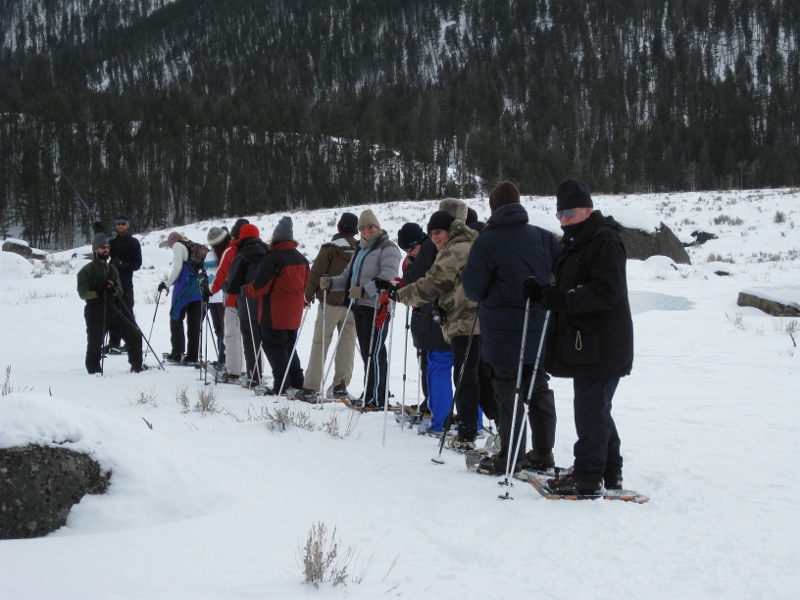 One of the highlights on every trip to Yellowstone is our time in the home of Dan and Cindy Hartman. Their log built home nestles in the forest, just outside of the park boundaries and each group that visits is treated to some amazing insights into the world of a wildlife photographer, who spends much of his time recording the animals, birds and scenery native to this incredible part of the planet.

Dan’s amazing insight and knowledge of the region means he is often called on for advice by television programme makers, including the UK’s BBC for their excellent series; “Yellowstone”

You can see some of Dan's excellent work here.

Dan talking below about the part the Wolves of Yellowstone play in the ecology of the region.

This tour was an unusual one for me as it took place in June, rather than at a time of year when the park can be over eight feet deep in snow! This obviously gives it a completely different complexion and gave everyone on the trip a completely different cast of characters to observe and enjoy. The “youngsters” (particularly the young bison, affectionately known as “red dogs”) are obviously a big attraction and although everyone likes to see these young additions to the park, there are also all the different varieties of birds here and the fauna was bursting with life, everywhere. There is nowhere else on earth like this place! 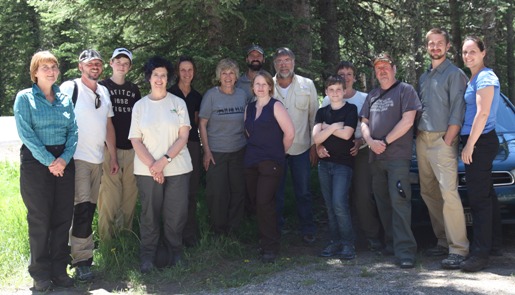 The group this year was fantastic company and, as usual, we were accompanied by Dog Listeners expanding and adding to their own knowledge. Some had been before and were returning (who could stay away?) and some were arriving for the first time to see the park “in the flesh”.

(Thanks to our Dog Listener,Cathy Bolton for this photo:)

No one left disappointed. Maybe we’re just lucky but our groups always manage to see things which are not "run of the mill". 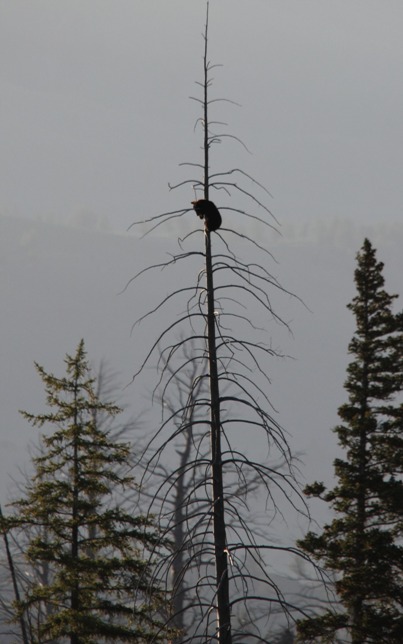 Like the Black bear cub here, who got the hang of the climbing bit (although a tree, rather than a twig would have been a better choice!)  but hadn’t thought ahead about the return trip. Mum watched on unconcerned from the ground, maybe she’d done the same thing herself as a youngster?

Having seen a heavily pregnant Elk as we left the park one evening we saw her again the next morning happily protecting her newborn...Fantastic! 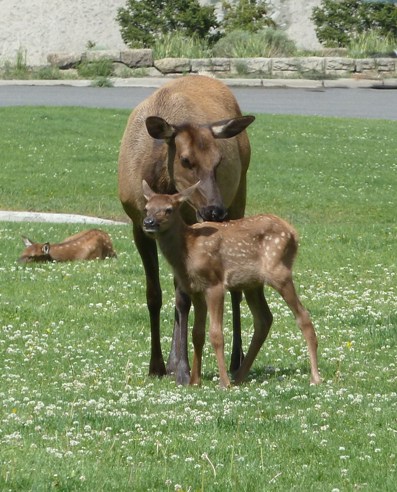 The patience required for waiting for and hopefully watching wolves means that the group work as a good team and all are ready to call attention to any possible sighting (even when it turns out to be just a lump, bump or hump). No one minds the odd false alarm either as this means no opportunity is lost to catch sight of the wonderful animals of Yellowstone.

Early Monday morning we had parked in the Lamar Valley as we could see some herds of Bison, Elk and Pronghorn heading down the hillside. One of our Dog Listeners, Nan Tubb, said that she thought she heard a wolf howl and in the next  moment, members of the Lamar Canyon pack could be seen in pursuit of the fleeing herbivores and, just as suddenly as they appeared, they had disappeared over a ridge!

Of course, the experience is also enhanced by a visit to the home of Dan and Cindy Hartman, who happily share their vast experience of the creatures of the area. Visiting Dan and Cindy also provides exceptional opportunities to watch the birds and Pine Martens living around their beautiful log cabin. Thanks to Dan and Cindy’s vast experience on where and when to observe the creatures, we were directed to the nest site of the rare and illusive Great Gray Owl, where we were unusually privileged to see both the parent bird and the chick on the nest. 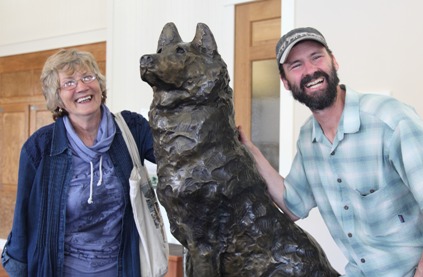 One of the most important wolves of the famous Druid Peak Pack was known as 42F and along with her lifetime partner 21M she proved vital to the reintroduction programme. Nathan and Linda were part of the team that watched over their progress as well as their development and here is Nathan, along with Jan and the life size bronze of 42, created by George Bumann. It’s rightfully in pride of place in the Yellowstone Institute in Gardiner.

A fantastic trip and I, for one, can't wait for the next one!

A short film shot on our last trip. This is a close as you'll ever get to a free living bear!

A Little of my History With Yellowstone

When I determined to discover the language of the dog, little did I realise that I would come to know one of the most beautiful places on our planet so well; with its amazing animals and wonderful people who live around and care for the natural world that is Yellowstone National Park. 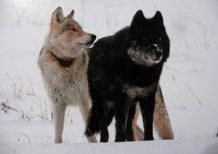 What makes this magical place so special for me is that due to the dedicated research and documentation of the grey wolf packs that were reintroduced in 1995 and 1996, I have been able to understand the world of all dogs, including our domestic companions in more detail than I ever dreamed possible.

Since 2004 I have been able to watch and study so many of the packs that play out their lives throughout the park and I have come to know and learn from the special people who are a part of the wolves' return and success story over those years. 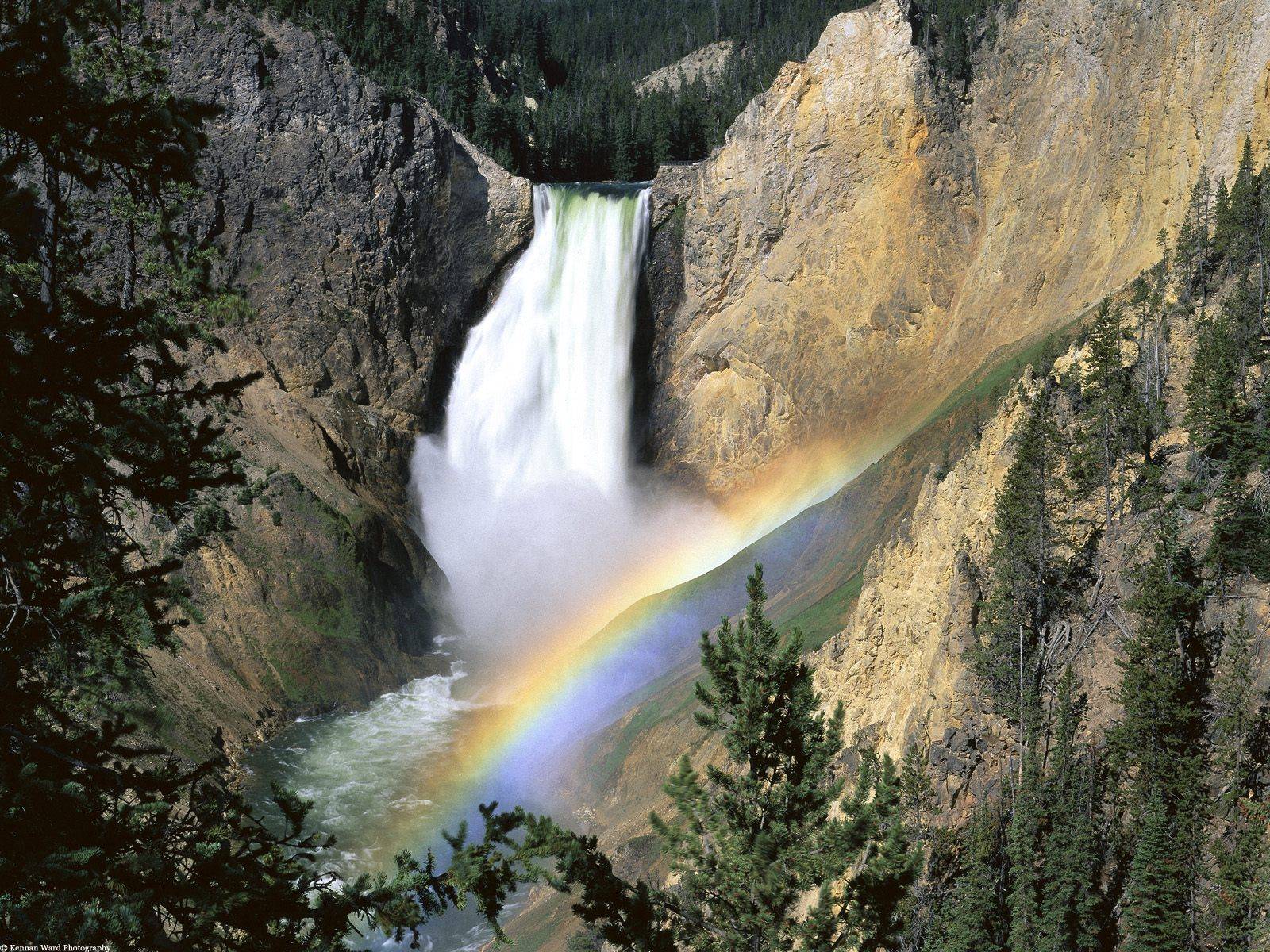 Project leader Dr Doug Smith told me that he had learnt parenting skills from the wolves as they had infinite patience and used only positive reinforcement.

I am extremely grateful to the people who have been so generous with their time and freely shared their knowledge: researcher and biologist Dan Staler, who has kindly supplied me with copies of his detailed research and findings,. Dr. James Halfpenny, biologist and author, who has done so much to spread the truth about these magnificent animals and  Dan and Cindy Hartman who use their photographic skills to capture the majesty of the park and the animals that make it so special.

My thanks also to Bob Landis the renowned film maker whose documentaries gave me so many answers and whose generosity, in giving me hours of footage, furthers my knowledge and helps with the teaching of my courses. 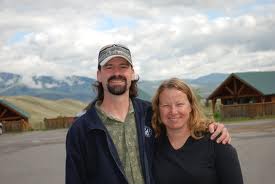 There are two very special friends I want to mention Linda Thurston and Nathan Varley who share, so freely, their knowledge and love of this part of North America through "Yellowstone Wolf Tracker". Alongside them I have experienced and learnt so much as well as having so much fun and what started as my own dream of watching wolves living free, has now grown and inspirational tours are co-ordinated by Linda and Nathan, opening up to anyone the opportunity to share the wonder that is Yellowstone National Park.

Special 'Dog Listener' Wolf Watching tours offer unique opportunities to experience the magic of Yellowstone and its amazing wildlife during the day with evening presentation by the Naturalists, Researchers, Film-makers and Photographers, who are happy to share their extensive knowledge.